Yesterday we crossed the first item off of our family’s 2016 Summer Bucket List, a trip to the beach! While it won’t be the only beach trip we take this Summer, it was the first of many and full of valuable lessons and precious memories that I’m happy to share with you today.

To be honest, I wasn’t feeling up to this trip. Dutch and I were both under the weather last week and I was looking forward to spending our Sunday relaxing and catching up. But my husband Wes, had other plans. Being a true outdoors man, he can’t get enough of the beach. Sensing his anticipation, I decided to be a good sport and pull it together for the boys.

When you have kids, packing for the beach is enough to discourage you from going entirely! You’d have thought we were heading on a three day backpacking trip with how much stuff we brought along. And believe me, it’s all important!

We used just about every item we brought along, so I’m glad we took the extra time on the front end to prepare. I’m especially glad we packed sweaters because June Gloom is in full effect right now and the weather didn’t warm up until well after noon. Although it was overcast, we all wore sunblock. In my experience, the sun can be even stronger during overcast conditions. We applied it before we even left the house. That is a little habit I’ve developed over the years before heading on outdoor adventures like these. It’s one less thing to think about once you arrive. 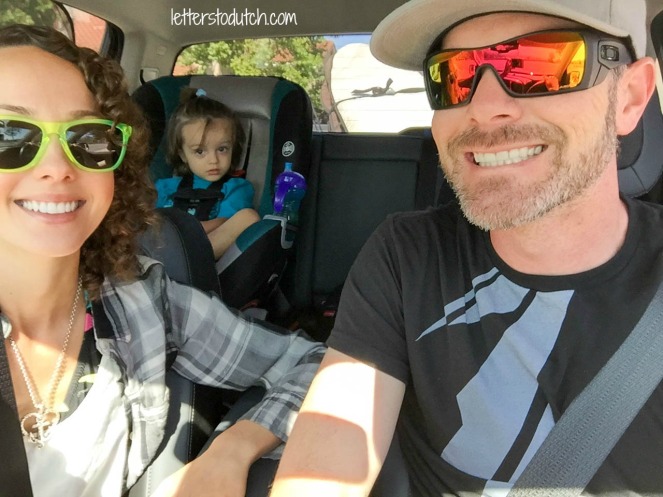 I felt so much relief once the car was loaded and we were on our way. Can any other parents relate? It’s like once you get out of the house, you can finally relax. At this point, Dutch was fully aware of where we were headed. Here’s a cute video I captured early in the drive of him telling us where we were going.

Along the way we listened to Reggae music and talked with Dutch about everything we saw. Just as we entered the canyons, the clouds began rolling in. Check out this awesome cloud layer creeping up and over the Santa Monica mountains ahead. 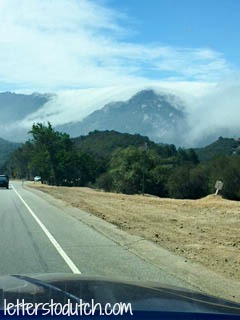 It felt kind of funny taking pictures of signs like this, being that I’ve lived in Southern California my whole life and I’m not a tourist. But I realize that people all over the world read this blog and it might just be kinda cool for them to see the Malibu city sign. 🙂 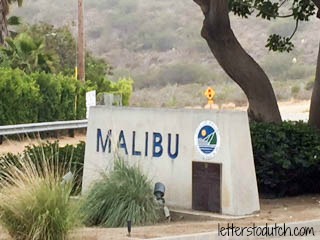 We arrived at Malibu State Beach and began the process of unloading the car. As I mentioned earlier, the weather was gloomy and chilly for the first few hours, but that didn’t stop Dutch from enjoying himself. As Wes and I set up, he sat by himself looking out at the water for the longest time, just taking it all in. This photo is so precious to me because it reminds me of my child’s temperament. He is happiest when surrounded by nature like this. 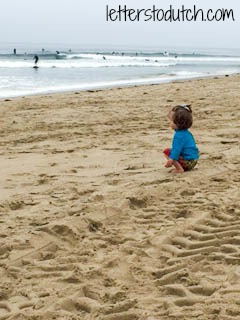 Sitting still didn’t last for long though. Dutch wanted to explore every square inch of that beach. Wes and I switched off taking long walks along the beach with him, letting him adventure his little heart out. I was reminded during this trip of how important partner communication is while raising an adventurous toddler. Wes went off to surf and fish, and I was happy to see him enjoying his hobbies. I’ll admit though, there were times while he was away that I felt exhausted keeping up with Dutch. Later that day I mentioned to Wes how challenging it was and he asked me why I didn’t call for help sooner. To be honest, I don’t know why I didn’t. I probably just fell into the same selfless trap most Mothers do. We want our families to be happy that we almost forget entirely about our own needs. For our next family beach trip, we agreed to rethink pursuing hobbies. Dutch is at an age where we both need all the help we can get caring for him. An extra set of hands and eyes makes adventuring like this with a toddler much more relaxing and enjoyable. 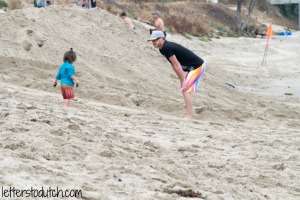 During one of those walks while the boys were away, I took a moment to snap this selfie because I wanted to show you all my new necklace! Wes surprised me with it a few weeks ago to represent all the fun we we’re going to have over the Summer, isn’t that SO sweet! 🙂 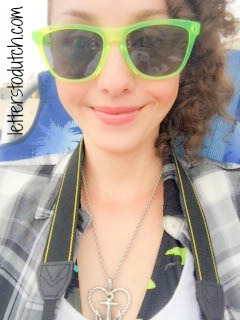 After some time exploring, Dutch finally settled in to eat some snacks and play in the sand. We may have been at the beach, but to Dutch everything is a race track right now. He enjoyed burying his cars in the sand and digging them out. And how about this new expression he’s sporting? I think it’s a mixture of clenching his jaw from teething pain and squinting his eyes from the sun. If only he’d wear the hat or sunglasses we brought for him, but he refused so I guess that’s just not Dutch’s style. 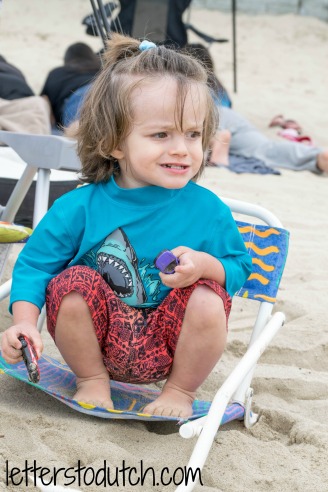 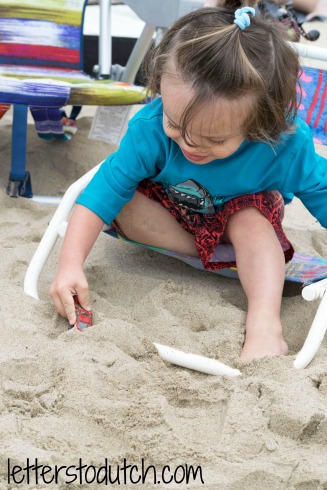 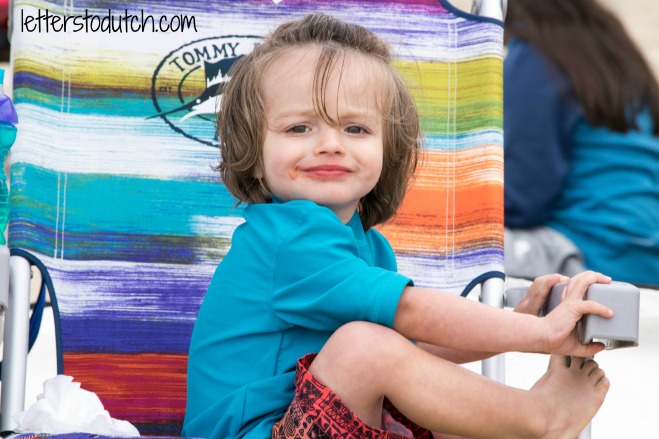 The highlight of the day for Dutch was when we brought the water to him. He was interested in the ocean and even braved to let the waves wash over his feet a little, but he remained uneasy about venturing any further. I finally had the idea to fill some buckets with water and bring them to him. He sat shoveling sand and dunking his cars in the water for quite some time. He even saw his first ladybug, which landed on one of his toys right in front of him. 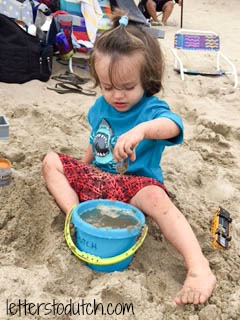 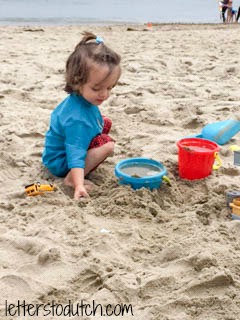 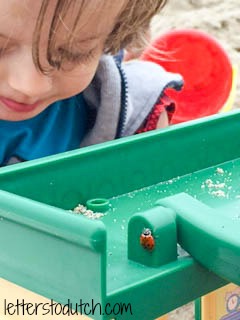 This photo pretty much sums up Dutch right now! Furrowed expression, chipped tooth, snotty nose, mouth covered in strawberry juice and hair in his eyes. It’s so imperfect, its perfect! I love everything about my little boy! 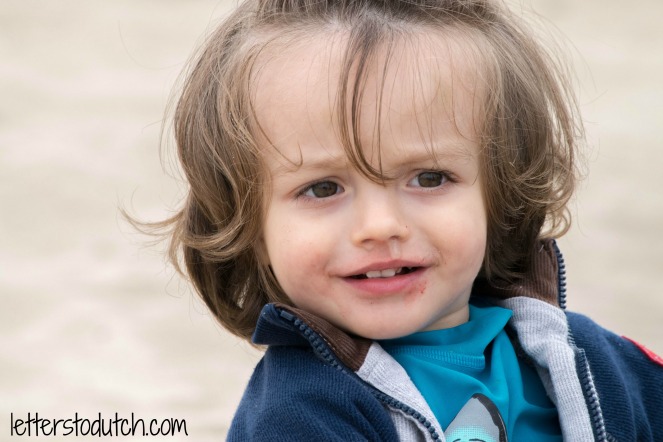 The sun finally began to show it’s face well after noon. As you can see from the picture below, Dutch was too tired to enjoy it. It was time to pack up and load the car so he could catch a snooze. He fell fast asleep 10 minutes into our drive home. 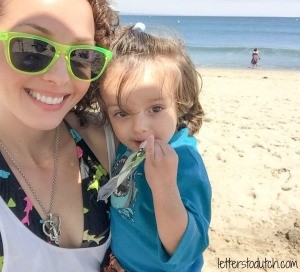 As promised, I am writing about all of our bucket list experiences this Summer. Be sure to keep up with our adventures by visiting our Summer Bucket List Series page. Also, if you subscribe below, each post will be delivered directly to your inbox.

Fellow parents, will you share with me some of the short stories or valuable lessons you’ve learned from a family beach trip? I’d love to hear from you, and if you loved this post please feel free to share it with friends! 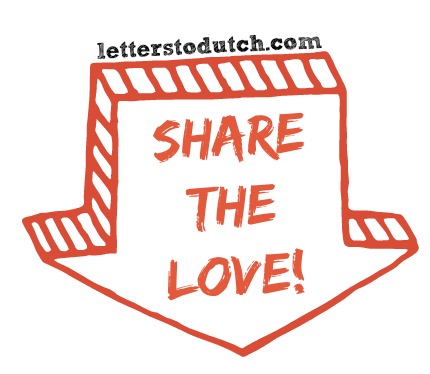 View all posts by Lindsay Faria

7 thoughts on “Lessons & Memories From a Family Beach Trip” 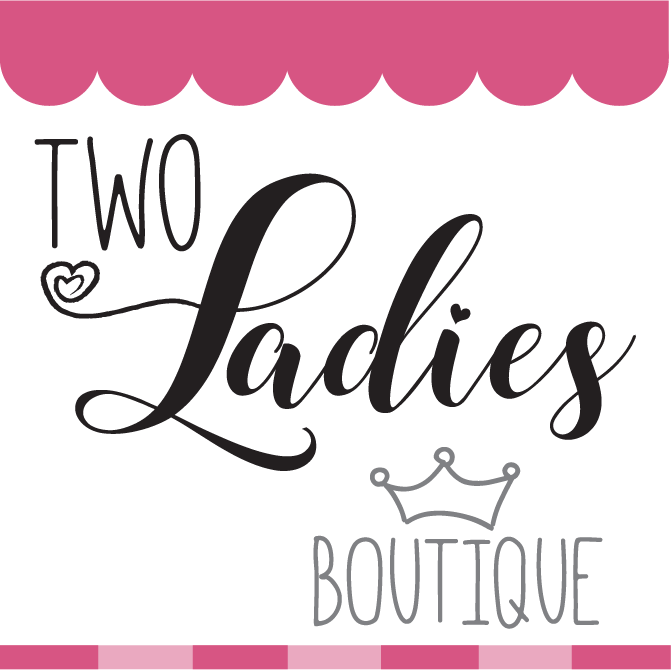 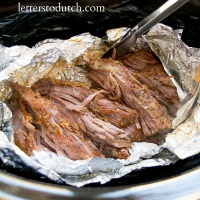 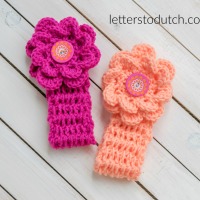 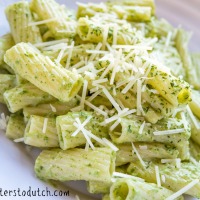 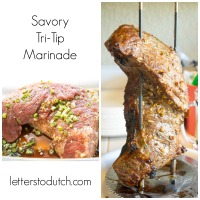 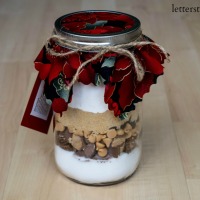 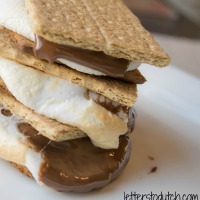