I’m so proud of my husband Wes, he wins at everything he puts his mind to. Yesterday, he received his blue belt in Brazilian Jiu Jitsu (BJJ) after training for only 10 months. He’s on the 5 year plan to achieve black belt status… at least that’s what his Professor (4x BJJ World Champion Fabio Leopoldo) stated as he carefully tied Wes’s new blue belt around his waist.

My husband Wes and my brother Wes train together at the same academy. No, that’s not a typo. Yes, they share the same first name. How have we survived this little dilemma? By using their full names so they always think they’re in trouble. My husband is Weston (left), and my brother is Wesley (right). Here they are preparing to roll before the belt ceremony.

As training began, Weston and Professor Fabio sparred on the mat directly in front of me… or as they call it in BJJ, rolling. I was able to capture the shots below as a result. The photo on the right (helicopter armbar) is one of my favorite shots of the day. I only wish I had the full frame of his legs extended in the air. Nonetheless, it proves the intensity of the sport. Weston came up from this move with a small gash to his forehead and blood dripping from his face. Professor Fabio quickly glanced at me, pointed at Wes, then flexed his arms as if to say, “He’s tough!” I love seeing examples of servant leaders in the community. Professor Fabio might be the greatest example I’ve seen in awhile. He may be a world champion, but he is teaching and leading from the mat, which is exactly where his BJJ journey began. 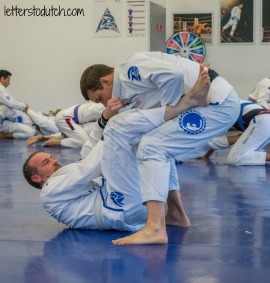 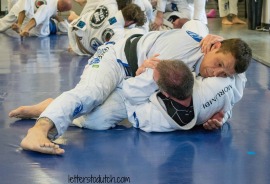 Here are some sweet shots of Wesley in action. He studied Karate from a young age so watching him roll like this kind of took me back to our childhood. He’s picked up BJJ quickly and is such a stud, on and off the mat.

Our good friend and business partner Jordan also received his blue belt last night. I love these shots of him being recognized, his smile says it all. Humble. Grateful. Proud. He’s such a champion.

The following photo brings me to the point of this post. I shot it from the perspective of Jordan’s peers watching on as he received his belt promotion. Professor Fabio, along with the other instructors, suggested numerous times throughout the ceremony to be cautious of envy as others received recognition.

They live by the philosophy that jiu jitsu is about the journey.

It’s about individual progress and growth.

It’s about asking yourself, “How can I improve?” 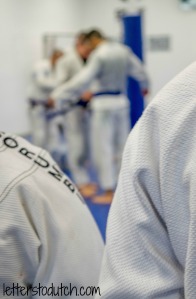 That got me thinking about my blogging journey. Letters To Dutch was started exactly 90 days ago because of my love of creating. Since then it’s evolved into a memory book for Dutch, a business platform, and a community for creative families. Being the ambitious person that I am, I catch myself from time to time comparing myself to other bloggers.

And isn’t it true that comparisons of any kind lead us to feelings of envy, doubt and disappointment?

When we feel this way it’s easy to forget why we began at all!

I was reminded last night that 90 days ago I began a journey of my own. I entered a highly competitive industry with virtually no experience or qualifications. You might even say that the odds were totally stacked against me… but I believed in my ideas. I believed that my crafts were worthy of posting, and my recipes worthy of tasting. Most importantly, I believed that by sharing my personal experiences, that I might just make a difference in someone’s life.

I’m grateful to say that I have.

This journey is what I make it, and as I weave my way along this windy road I am paving the way to my creative dream.

Here’s a call to action for anyone on a journey of their own:

Oh and did I mention that I just finished writing my first EBook? It’s called Chocolate For Dessert and I created it as an exclusive gift for my email subscribers.

What are the ways you remain focused on the journey? I’d love to hear your thoughts, let’s chat in the comments below! And if you loved this post, feel free to share it with friends.

Follow Letters To Dutch for a deeper look and behind the scenes updates on all our creative projects.

View all posts by Lindsay Faria